What is Melanoma? Learn the ABCDE of Moles 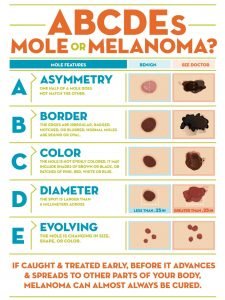 Melanoma, the most serious type of skin cancer, develops in the cells (melanocytes) that produce melanin — the pigment that gives your skin its color. To help you identify characteristics of unusual moles that may indicate melanomas or other skin cancers, think of the letters ABCDE:

Cancerous (malignant) moles vary greatly in appearance. Some may show all the changes listed above, while others may have only one or two unusual characteristics. Make an appointment with your doctor if you notice any skin changes that seem unusual.

The exact cause of all melanomas isn’t clear, but exposure to ultraviolet (UV) radiation from sunlight or tanning lamps and beds increases your risk of developing melanoma. Limiting your exposure to UV radiation can help reduce your risk of melanoma.

The risk of melanoma seems to be increasing in people under 40, especially women. Knowing the warning signs of skin cancer can help ensure that cancerous changes are detected and treated before the cancer has spread. Melanoma can be treated successfully if it is detected early.

Melanomas can develop anywhere on your body. They most often develop in areas that have had exposure to the sun, such as your back, legs, arms and face. Melanomas can also occur in areas that don’t receive much sun exposure, such as the soles of your feet, palms of your hands and fingernail beds. These hidden melanomas are more common in people with darker skin. The first melanoma signs and symptoms often are:

Normal moles are generally a uniform color — such as tan, brown or black — with a distinct border separating the mole from your surrounding skin. They’re oval or round and usually smaller than 1/4 inch (about 6 millimeters) in diameter — the size of a pencil eraser. Most moles begin appearing in childhood and new moles may form until about age 40. By the time they are adults, most people have between 10 and 40 moles. Moles may change in appearance over time and some may even disappear with age.

Melanoma occurs when something goes wrong in the melanin-producing cells (melanocytes) that give color to your skin. Normally, skin cells develop in a controlled and orderly way — healthy new cells push older cells toward your skin’s surface, where they die and eventually fall off. But when some cells develop DNA damage, new cells may begin to grow out of control and can eventually form a mass of cancerous cells.

Just what damages DNA in skin cells and how this leads to melanoma isn’t clear. It’s likely that a combination of factors, including environmental and genetic factors, causes melanoma. Still, doctors believe exposure to ultraviolet (UV) radiation from the sun and from tanning lamps and beds is the leading cause of melanoma.

UV light doesn’t cause all melanomas, especially those that occur in places on your body that don’t receive exposure to sunlight. This indicates that other factors may contribute to your risk of melanoma.

Factors that may increase your risk of melanoma include:

You can reduce your risk of melanoma and other types of skin cancer if you avoid the sun during the middle of the day. For many people in North America, the sun’s rays are strongest between about 10 a.m. and 4 p.m. Schedule outdoor activities for other times of the day, even in winter or when the sky is cloudy. You absorb UV radiation year-round, and clouds offer little protection from damaging rays. Avoiding the sun at its strongest helps you avoid the sunburns and suntans that cause skin damage and increase your risk of developing skin cancer. Sun exposure accumulated over time also may cause skin cancer.

Wear sunscreen year-round. Use a broad-spectrum sunscreen with an SPF of at least 30, even on cloudy days. Apply sunscreen generously and reapply every two hours — or more often if you’re swimming or perspiring.

Wear protective clothing – cover your skin with dark, tightly woven clothing that covers your arms and legs, and a broad-brimmed hat, which provides more protection than does a baseball cap or visor. Some companies also sell protective clothing. A dermatologist can recommend an appropriate brand. Don’t forget sunglasses. Look for those that block both types of UV radiation — UVA and UVB rays.

Become familiar with your skin so that you’ll notice changes. Examine your skin often for new skin growths or changes in existing moles, freckles, bumps and birthmarks. With the help of mirrors, check your face, neck, ears and scalp.

Examine your chest and trunk and the tops and undersides of your arms and hands. Examine both the front and back of your legs and your feet, including the soles and the spaces between your toes. Also check your genital area and between your buttocks.

When you’re a caregiver for an older loved one, whether you’re their child, spouse, relative or friend, your relationship often takes on a new dynamic as your responsibilities change. In some cases, your relationship may become stronger, but in others, the stresses of...

END_OF_DOCUMENT_TOKEN_TO_BE_REPLACED

Listen to an interview recorded by The Caregivers Dilemma on June 24, 2022 by Emilia Bourlan, OTR, ECHM. Guest speaker Doni Green, Director of Aging Services, has led the North Central Texas Area Agency on Aging for over 25 years. In this podcast, learn more about the...

END_OF_DOCUMENT_TOKEN_TO_BE_REPLACED

How to Change Sheets of an Occupied Bed

One task many caregivers struggle with is how to change the sheets when the person you are caring for can't be moved from the bed. Changing sheets regularly is important for the health and hygiene of your care recipient. It’s a critical step toward preventing...