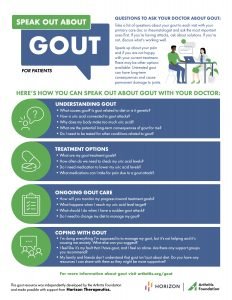 Gout is a common type of inflammatory arthritis that can come and go. It usually affects the big toe or ankle, but can impact other joint such as the knee, wrist, or shoulder. People with osteoarthritis in their fingers may experience their gout in their finger joints. If you are having an attack of gout, you may also have a fever.

Gout flares usually happen suddenly, often at night and reaching the worst pain within 12 to 24 hours, then slowly go away on their own. These flare-ups will typically resolve in 7-10 days, even without treatment.

Some people eventually develop tophi, large masses of uric acid crystals that form in soft tissues or bones around joints and may appear as hard lumps.

What are the causes and triggers of Gout?

Gout can develop in people who have high levels of uric acid from the breakdown of purines, which are found in human cells and many foods, including red meat, organ meats, some seafoods, sugary sodas, and beer. When uric acid builds up, either because the kidneys don’t excrete it the way they should or from consuming a high-purine diet, it can form needle-like crystals that can lodge in joints – often the big toe – causing sudden, severe pain and swelling.

For centuries Gout has been associated with excess and is the butt of innumerable jokes. That stigma, along with fear of another painful flare, can increase stress and contribute to more inflammation in your body.

You’re more likely to develop gout if you:

How is Gout treated?

The treatment plan you and your doctor choose for your gout depends on the frequency and severity of your symptoms and your personal preference.

Lifestyle changes.
For some people, weight loss, if needed, and a Mediterranean diet or DASH diet may help prevent gout attacks. For decades, doctors told gout patients to limit red meat (beef, pork, lamb and organ meats) and alcohol, but it’s now known that an overall healthy eating plan is far more effective and has added benefits for the heart — a common concern in people with gout. One study of nearly 45,000 men found that those who ate a typical American diet — red meat, French fries, sweets and alcohol — had a 42% greater chance of developing gout than those eating a DASH diet. Eating the low-sodium DASH diet, with an emphasis on fruits, veggies, nuts, whole grains and other whole, unprocessed foods, reduced uric acid levels and gout risk significantly.

Anti-inflammatories.
When you’re in the midst of an attack, you want to stop it as fast as possible. Doctors are likely to recommend a brief course of: Nonsteroidal anti-inflammatory drugs (NSAIDs), such as ibuprofen (Motrin, Advil) and naproxen (Aleve), which are available over the counter or in stronger prescription versions. NSAIDs are generally prescribed for people under 65 who don’t take blood thinners or have a history of bleeding, because NSAIDs can cause ulcers and intestinal bleeding. Colchicine, a prescription anti-inflammatory relieves gout pain but may have unpleasant side effects like nausea, diarrhea or vomiting. Lower doses are as effective as higher doses and produce fewer side effects. Corticosteroids — also effective at bringing down inflammation quickly but with potentially serious side effects.

Uric acid-lowering drugs.
If you have several gout attacks a year, tophi or signs of joint damage on X-rays, your doctor may suggest taking drugs to lower uric acid and prevent further complications. According to the American College of Rheumatology’s (ACR) 2020 gout guidelines, allopurinol is the first choice for all patients. Febuxostat (Uloric) may be considered for some patients who cannot take allopurinol, but it carries a higher risk of heart-related death. The ACR also recommends trying a treat-to-target approach for gout, in which you and your doctor decide on a goal — usually less than 6 mg/dL blood level of uric acid — and adjust your medication and other treatments until you reach it.

Learn more about Gout from the Arthritis Foundation:

The number of Millennial caregivers is growing, and the characteristics of these caregivers are unique. Sometimes, generational differences in perspective can make caregiving more challenging, which this program will discuss. Specific resources for this segment of...

END_OF_DOCUMENT_TOKEN_TO_BE_REPLACED

Facts About Aging and Alcohol

Many people enjoy an alcoholic beverage or two on occasion with friends or family, but alcohol can be addictive. As we age, alcohol consumption can also make existing health problems worse and have dangerous interactions with some medications. Anyone at any age can...

END_OF_DOCUMENT_TOKEN_TO_BE_REPLACED

Watch this free presentation titled, Combating Loneliness in Seniors, presented by Dr. Thomas Weiss, Geriatric Psychologist. Loneliness can be described as the discrepancy between a person's desired and actual social relationship. It's a unique situation in which a...