The 4 Most Common Types of Dementia 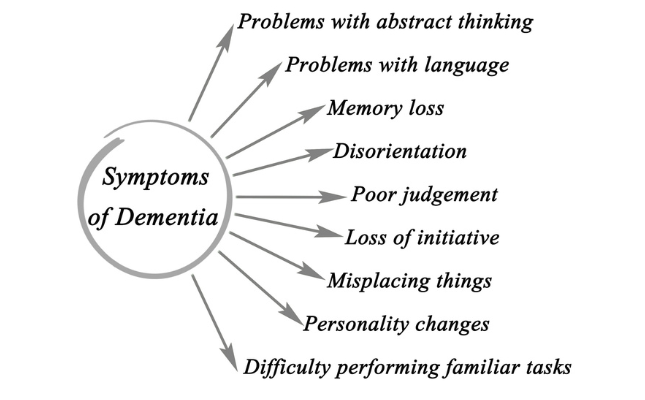 Not so long ago, people dismissed dementia-related behaviors as senility or “old age”. We now have a better understanding of the brain, brain disorders, and the different types of dementia.

While dementia is not a specific diagnosis on its own, any disease or condition that causes brain damage can be categorized as dementia. Dementia is a general term for any severe decline in mental abilities due to the brain’s physical deterioration. Not all types of dementia are the same. Below, we review the four most common forms of dementia:

Understanding these four main types and knowing what to look for can help caregivers ensure those they care for get prompt medical treatment.

Alzheimer’s Disease is the country’s sixth?leading cause of death, with more than 5 million Americans living with this disease. While the precise causes of Alzheimer’s disease are unknown, research indicates that it stems from a mix of the following:

Mayo Clinic reports that in less than 1% of cases, a specific genetic change leads to the development of the disease.

Symptoms of Alzheimer’s include:

While there is no cure, many therapies can improve the quality of life for people with Alzheimer’s. Because of its prevalence, the U.S. government has prioritized Alzheimer’s research, hoping to find a cure by 2025.

Also called cortical Lewy body disease or diffuse Lewy body disease, LBD affects about 1.4 million people in the U.S. It is the third most common cause of dementia. Because the symptoms closely mimic other diseases like Alzheimer’s and Parkinson’s, LBD is frequently under-diagnosed. LBD is caused by the appearance of abnormal proteins in nerve cells which impair and impede normal functioning. Symptoms of LBD include the following:

While it can take up to two years for symptoms to reach levels where they can be diagnosed, early detection leads to better outcomes. There is no cure, but treatment methods include medication as well as non?medical options, such as physical, speech, and occupational therapy.

FTD is also known as frontotemporal dementia, frontotemporal lobar degeneration (FTLD), or Pick’s disease. It affects between 50,000 and 60,000 Americans, according to the Association for Frontotemporal Degeneration. FTD differs from other types of dementia in two significant ways:

Symptoms of FTD include the following:

Like other forms of dementia, frontotemporal dementia has no cure, but there are effective medical and non?medical interventions for treating symptoms.

Medical alert systems connect people with help in the event of a fall or other emergency. Medical alert devices are available as at-home systems or on-the-go wearables, monitored or unmonitored, and traditional or specialized. Some systems include a wearable help...

END_OF_DOCUMENT_TOKEN_TO_BE_REPLACED

Alcohol Related Dementia, malnourishment, and Medication Interactions: How they Affect the Brain