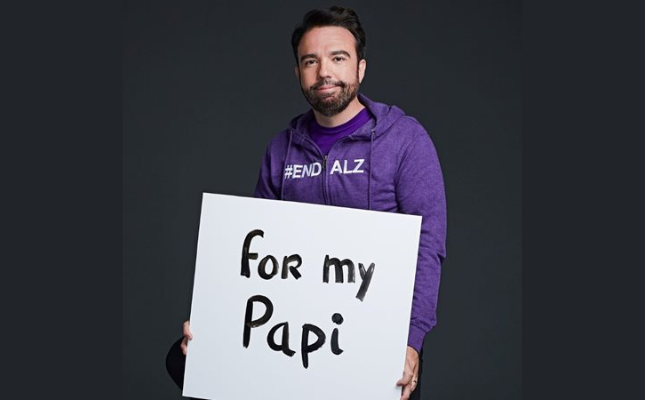 “If it wasn’t for humor, we wouldn’t have gotten through any of this,” comedian Chris Garcia says of his family’s Alzheimer’s experience. His father, Andres, a Cuban refugee, died from complications due to Alzheimer’s in 2017. “Luckily my mom is the funniest person in the world. We’re just a funny family.”

One day, several years ago, my mom called to tell me that my dad, who was living with Alzheimer’s, tried to kiss her. I mean, really kiss her. He stopped himself, saying: “I can’t do this. I have a wife and two kids.” So, my dad tried to cheat on my mom with my mom!

He didn’t, because he was a gentleman. Clearly he has a type — and it’s my 4-foot-8 Cuban mother! That was one of those moments that was difficult, but yet still so funny. And the special part is that he still remembered that his wife of 50 years was his true love.

My father was a great dad. My parents were Cuban refugees who moved to the United States when my dad was in his 30s. They moved to Los Angeles, where I was born.

Like many Cuban dads and sons, we played baseball all the time — he taught me how to throw a knuckleball when I was 8! — and he had very high expectations of me overall. He wanted me to be an astronaut, and I’m a comedian! Congrats, Dad! In truth, my dad always had great expectations, and yet was always the most supportive father.

The first time my dad forgot who I was, we were driving past my former high school and baseball field. He turned to me and he said, “Young man, did you ever play baseball?”

That’s when I knew that my dad would never be the same again. We played baseball all the time. I couldn’t even try to count how many times I’ve gone to the batting cages with my dad. I was a good ball player, playing all through high school, and he completely forgot that I ever played the game. I told him that I’d played before, and he said: “I wish I would’ve known, I would’ve taught you how to throw the ball.” That moment was heavy, and heartbreaking.

In pop culture, people often make jokes about Alzheimer’s and about people being forgetful. I wish the disease was just that. It is so much more than forgetting a person’s name, or misplacing your keys. The disease affects every part of your brain and body. I had no idea that my dad would forget how to bathe, how to brush his own teeth and hair, and eventually how to walk.

I am thankful that the disease did not completely come for his dignity and his love for his family, because even though he didn’t know who we were, he was with those that loved him most. He was sweet and loving to the end, and we gave him all the love we had during our long goodbye until his passing on February 5, 2017.

I had to find a way to tell my own story and process my own grief, so I did that — onstage, in podcasts and on social media, and when talking to fellow comedians and writers.

Today, I remember the things he couldn’t, the memories from my childhood and growing up. This includes the harder days of caring for my dad, helping him do the things he used to help me do. And yet I would do it all again. Te amo, Papi.

About: Comedian Chris Garcia keeps people laughing with his stand up when he isn’t writing for television. He is a proud son of Cuban refugees. Listen to Scattered, Chris’s critically acclaimed podcast about his father.

END_OF_DOCUMENT_TOKEN_TO_BE_REPLACED

Gary Barg is Founder and Editor-in-Chief of Caregiver Media Group based in Fort Lauderdale. Since 1995, it has published Today’s Caregiver magazine, Caregiver.com, and hosts the Fearless Caregiver Conferences across the country. Barg explains what pushed him to start...