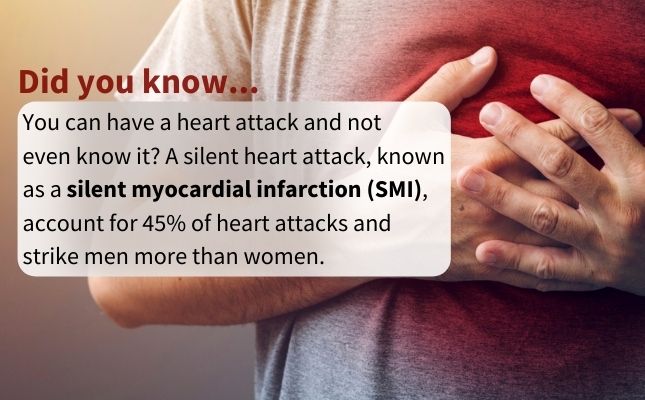 A silent heart attack or silent myocardial infarction (SMI), also called a silent Ischemia, is a heart attack that has either no symptoms, minimal symptoms or unrecognized symptoms. A heart attack is not always as obvious as pain in your chest, shortness of breath and cold sweats. A heart attack can actually happen without a person knowing it. You can understand why it is called a “silent” heart attack.

Seek immediate medical attention if you experience one or more of the following:

SMI’s are described as “silent” because when they occur, their symptoms lack the intensity of a classic heart attack, such as extreme chest pain and pressure; stabbing pain in the arm, neck, or jaw; sudden shortness of breath; sweating, and dizziness.

“SMI symptoms can feel so mild, and be so brief, they often get confused for regular discomfort or another less serious problem, and thus men ignore them,” says Dr. Jorge Plutzky, director of the vascular disease prevention program at Harvard-affiliated Brigham and Women’s Hospital.

People who have an SMI and don’t get treatment have a three times greater risk of dying from coronary artery disease.

What is a Patient Portal and how can it help me?

END_OF_DOCUMENT_TOKEN_TO_BE_REPLACED

Older adults are at highest risk of osteoporosis, with nearly 75% of hip, spine, and wrist fractures occurring in people aged 65 years old or over. One of the most important steps for prevention is to be alert to any risk factors you may have for osteoporosis and...