Shonda’s story: Why Caregiving is a Challenge and an Honor 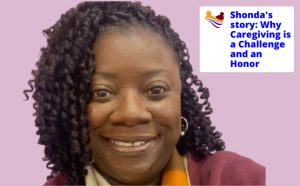 Shonda Bell became an advocate for people with dementia after both of her parents were diagnosed with Alzheimer’s two years apart, requiring her to navigate complex medical issues and even financial fraud.

Shonda Bell — a special education teacher from Albany, Georgia — experienced a moment of surprise in 2016. Her mother, Charlie Cross, called out of the blue and mentioned she had a falling-out with her husband, Walter Cross, and asked to stay with Shonda. For three months, Charlie lived with Bell and her family — her husband, daughter and her dog (who she affectionately calls her “fur baby”).

“During that time, my husband and I began to notice that she was repeating conversations, and not really knowing it,” Bell told Being Patient, adding that her mother was also starting to get forgetful when she was cooking. “She even burnt up the microwave. She might have put something metal inside of it.”

Worried, Bell and her husband set up a doctor’s appointment for her mother. Bell discovered that her mother had been prescribed donepezil but had never filled the prescription. The doctor set up a brain scan and other diagnostic measures, which culminated in a diagnosis of Alzheimer’s dementia.

Bell became her mother’s caregiver as she moved in permanently. Her father also received a dementia diagnosis in 2018. Since then, she has learned as much as she could about Alzheimer’s so she could advocate and care for her parents as best as possible.

Bell started trying to figure out why her mother and father had a falling out. Charlie kept insisting that Walter wanted her to pay for everything. Bell was confused, because her father usually paid all the bills, but figured money might have been tight since her parents retired.

She asked her mother what “everything” was. “She [Charlie] looked at me with a blank stare,” Bell said. “She couldn’t tell me what everything was.” Calling her father, she learned that he wanted help with paying a $25 credit card bill.

Bell sought to help her mother sort her finances and dived into her credit card accounts, which were almost maxed out. She spotted strange payments to medical supply companies that billed her mother’s Medicare number for equipment that she did not need. Her cards also had recurring payments for unneeded credit card protection services.

With the help of a consumer credit counseling service, Bell helped straighten out her mother’s finances. Unfortunately, elder fraud is rampant in the U.S. with an estimated $4.8 billion reported lost every year. It is likely that this underestimates the issue, because some fraud isn’t detected, and other fraud isn’t reported. Some research suggests that older adults who are more susceptible to financial fraud were also more likely to develop dementia, and research suggests that financial missteps can be an early sign of dementia and persist for years after a diagnosis.

Bell quickly had to learn a lot more about dementia so she could care for her mother. She recalled that “the only thing the doctor told me when we got the diagnosis: ‘Your mom has dementia.’”

After moving back in with her husband, Bell’s mother had a mild stroke at the end of 2017. She started experiencing more cognitive decline and almost burned the house down cleaning. “That’s when we ended up having to take the keys [to the car] from her,” she said. “And that’s when we had to call in a sitter.”

Before the pandemic, Bell had a professional caregiver that would help her mother while she was at work. At 9:30 A.M., the sitter dropped off Bell’s mother for most of the day at an Alzheimer’s outreach center. “They have volunteers coming in to run bingo, games, arts and crafts, singing, music and a spa day,” she said.

Then in 2018, her father was rushed to the hospital after falling in the yard and hitting his head. After being examined by doctors and receiving a brain scan, he was also diagnosed with Alzheimer’s.

Years later, at an Alzheimer’s Association forum, she would mingle with others and discover that they had received a lot more information than her from their doctor. She believed that the doctor may have omitted specifics about her parents diagnoses, because he didn’t think she would understand. This experience is not uncommon: According to a recent Pew Research Survey, 56 percent of Black Americans felt that they received less respect than other patients.

Learning to become a caregiver on the fly

As an advocate, Bell regularly provides advice to other people whose parents are diagnosed with dementia. “I always tell them to learn as much about your parents’ disease as you can,” she said. Bell added that there are local resources that cater to individuals unable to afford a permanent caregiver or long-term care center.

“Get involved with your Area Agency on Aging because they help you with coordinating services,” she said. “Nine times out of 10, if they’re like me, you really can’t afford to place them [parents] in any kind of memory care center.” Education and local agencies help empower people to become informed caregivers.

Despite the challenge of having both parents diagnosed with Alzheimer’s dementia two years apart, she remains positive in the face of adversity. “It’s been the most challenging thing I have ever done in my life,” Bell said. “I count it as an honor.”

We want to hear your story! Why? Because your story matters. Have you ever listened to someone talk about their life and thought ‘Oh, someone else has been through that, too? I thought it was just me!’ Every story shared is a chance to aid another caregiver and help them feel less alone.

How did you become the caregiver for your loved one? My mother chose me as her caregiver. My mother-in-law did not have anyone else willing to care for her full time. Has your relationship changed with the loved one that you are caring for? If so, how? My...

END_OF_DOCUMENT_TOKEN_TO_BE_REPLACED

https://vimeo.com/668619499 Dave Iverson was a broadcast journalist who’d recently been diagnosed with Parkinson’s when he decided to do something he’d never quite imagined: He moved in to take care of his 95-year-old mom.  Winter Stars is the story of their...

END_OF_DOCUMENT_TOKEN_TO_BE_REPLACED

You are not alone! Family caregiving is a huge job and caregivers need both emotional support and physical help. The following caregivers discuss different support networks that work best for them. I could not have come as far as I am without my family’s support, all...