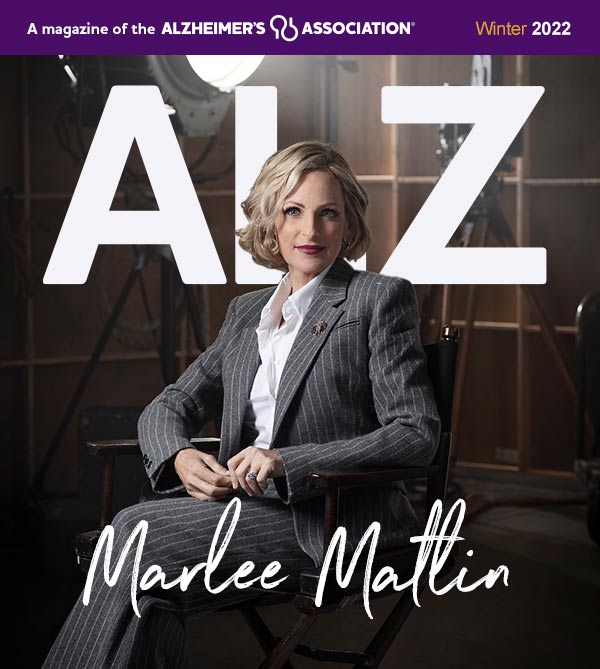 Marlee Matlin knows she owes a lot to her mother: Libby Matlin was one of her biggest cheerleaders as she embarked on an acting career, beginning at age 7 with the role of Dorothy in a local theater production of “The Wizard of Oz.” Before losing her mother to Alzheimer’s disease, Matlin thanked her for helping to further her career. Her mother responded, “Yes, I sure did. I sure helped you!”

That was Libby Matlin: outspoken, opinionated, independent. Growing up, Matlin says their relationship was loving but contentious — partially because she was a “brat.” When Matlin lost much of her hearing at 18 months old, Libby was devastated and fiercely protective. Along with Matlin’s father, Donald, Libby became a passionate advocate, speaking at local schools about support for deaf children.

Looking back on an acclaimed career that has spanned five decades — including an Academy Award for her movie debut in the 1986 film “Children of a Lesser God,” roles in hit television series like “The West Wing” and “Picket Fences” and, most recently, a starring role in the 2022 Academy Award-winning film “CODA” — Matlin is grateful for her mother’s unwavering dedication to ensuring she had the same opportunities as a hearing child.

Libby’s commitment to her daughter made it all the more painful when their roles were reversed: After Libby was diagnosed with Alzheimer’s in her 80s, Matlin had to be the strong, unwavering advocate.

Libby was not diagnosed with Alzheimer’s immediately. Matlin and her two older brothers, Eric and Marc, initially noticed some unsettling changes. Libby, who always sent cards and called on important dates, started to forget anniversaries and birthdays. A visit to her parents’ home in Florida confirmed Matlin’s fears. “I went into [my parents’] pantry and there was loads and loads of food, and most of it had expired. I filled seven or eight big black grocery bags with old food and took it out to the trash,” says Matlin. “But when I came back in the morning, my mom had brought it all back into the house.”

Matlin’s parents relocated to Chicago to be closer to her brothers, and soon after, a dangerous incident forced the family to seek a diagnosis. Matlin’s mother took heart medicine every morning, and after an afternoon nap, awoke and thought it was a new day and took the medication again. A doctor confirmed what they already knew: Libby had Alzheimer’s disease.

Donald’s health started to decline, and Matlin’s brothers provided care for both parents, managing their finances, medications and shopping. It was a huge responsibility that left Matlin, who lived in California, riddled with guilt. Her brothers, who were closer to the day-to-day challenges of caregiving, attended support groups. Matlin says she wished she had known more about their benefits, and emphasized the need for resources dedicated to deaf caregivers like herself.

“My brother said they learned a great deal from support groups. The fact that you can be overwhelmed with the sense of responsibility, to accept the changes, to accept the fact there is no cure,” she says. “I wish I had learned those things earlier.”

Libby died in 2021, eight years after her husband. Matlin misses both of her parents and their support — especially now. The actor is making her directorial debut in an episode of Fox’s anthology crime drama “Accused,” becoming one of the first female deaf directors in television. The storyline will feature a deaf woman who commits a crime of advocacy and protection.

“When I was offered the directing job, I immediately thought of my parents,” says Matlin. “I got sad that I couldn’t call them. So I just looked up and said, ‘Hey, I got the directing job. Please take care of me.’ But if they were around, they would be elated. They would tell anyone who would listen. They would be proud of me, just like I am, too.”

Source: Alz: A magazine of the Alzheimer’s Association.