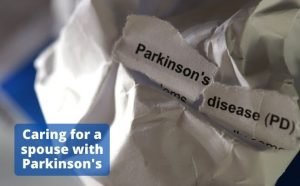 I became a caregiver when my husband was diagnosed with Parkinson’s disease (PD) in 1999. We had no idea what to expect. We were both working full-time with a son in elementary school. The first few years were pretty easy with no progression and few obvious symptoms. After his father passed away in 2001, the progression began. Part of PD is REM sleep behavior disorder (RBD), which is a sleep issue that causes the Person With Parkinson’s (PWP) to act out their nightmares. It’s accompanied by yelling, cursing, thrashing, punching, and any number of other disturbing behaviors. He began having severe pain with weather changes, which meant I went to most of the night-time school meetings by myself. Then the compulsive behavior and paranoia kicked in, a side effect of one of the medications he took.

Thankfully, I had found lots of online support by this time. A list serve for caregivers of persons with Parkinson’s disease called CARE taught me all about the side effects of the various meds, and the Well Spouse Association gave me the needed emotional support. The years passed. He went on disability in 2003, when he could no longer meet his writing deadlines. I lost my job in 2008, the year our son started college and the economy went into recession. I worked for a friend from the gym for two years just to have some income, but it became obvious that my husband needed me more and more, and my mother was also beginning to fall frequently. I ended up leaving that job and becoming self-employed. By 2011, my husband weighed 118 pounds due to dyskinesia, or involuntary movement, in his legs. He couldn’t sit comfortably for more than a few minutes, frequently couldn’t drive, had swallowing issues, and would freeze frequently. We began going places with a wheelchair in the car for the freezing times. He got speech therapy for the swallowing issues and we began thickening his liquids. Finally, though, the dyskinesia would be so bad that the sweat would pour off of his head when we went out. Things were looking bleak.

The doctor finally told us that he needed to have deep brain simulation (DBS) surgery. He had the surgery in November 2011. What a difference! As soon as the wires were placed, his dyskinesia subsided. He now weighs about 170 pounds, and has his life back. He was even able to write again! Three years later, he is still doing pretty well, but the progression is slowly visible again. I run a Well Spouse support group in the Atlanta area, still subscribe to CARE, and am very active in the local Parkinson’s community.