Alzheimer’s Disease and Other Dementias 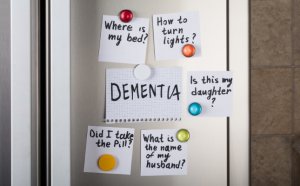 Being a caregiver for someone with Alzheimer’s disease or other dementias is challenging!

Some would say it’s the hardest, unpaid job on the planet, for which there is no training.  Learn more about dementias and caregiving tasks.

Be sure to check out our FAQ page for answers to common questions about Alzheimer’s and other dementias.

Caregivers often indicate love and a sense of duty and obligation when describing what motivates them to assume care responsibilities for a relative or friend living with dementia.

Caregiving is the act of attending to another person’s health needs and well-being which often includes providing assistance with one or more activities of daily living (ADLs), including bathing and dressing, as well as multiple instrumental activities of daily living (IADLs), such as paying bills, shopping and using transportation. Caregivers also provide emotional support to people with Alzheimer’s as well as communicating and coordinating care with other family members and health care providers, ensuring safety at home and elsewhere, and managing health conditions.

Dementia caregiving tasks can include:

Besides Alzheimer’s and dementia, there are several other brain conditions that can cause problems with thinking, memory, and behavior.

The Alzheimer’s dementia phase is further broken down into mild, moderate and severe dementia.

It is important to note that some individuals may have dementia-like symptoms without the progressive brain changes of Alzheimer’s or other degenerative brain diseases. Causes of dementia-like symptoms include depression, untreated sleep apnea, delirium, side effects of medications, Lyme disease, thyroid problems, certain vitamin deficiencies and excessive alcohol consumption. Unlike Alzheimer’s dementia and other dementias, these conditions often may be reversed with treatment.

Management of Alzheimer’s and other dementias

Use resources such as Area Agency on Aging (AAA). Types of assistance provided by AAAs:

Types of assistance available through AAAs for persons age 60 and older may include:

Be sure to check out our Resource Directory, FAQ, and Educational Events Calendar for more great information! Permission is granted to duplicate any and all parts of this page to use in education programs supporting family members caring for elders.