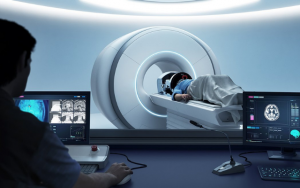 Imagine strapping on a high-tech helmet, lying on an MRI table and, after microbubbles bounce in your blood vessels and ultrasound waves are beamed at your brain, walking away with fewer symptoms of Alzheimer’s disease. That may sound like it’s straight out of a science fiction movie, but it’s not. What’s called focused ultrasound technology is just one of the many avenues scientists are exploring in an ongoing quest to find a treatment for the most common type of dementia.

“We need to really explore and be bold in terms of the way we’re looking at Alzheimer’s, because the disease is not going away, it’s increasing,” says neurosurgeon Ali Rezai, M.D., executive chair of the Rockefeller Neuroscience Institute at West Virginia University and a leading researcher on the topic.

In fact, the number of people living with dementia, including Alzheimer’s disease, globally is expected to nearly triple by 2050, a new study published in The Lancet predicts. Cases in the U.S. could increase from nearly 5.3 million (a 2019 statistic) to about 10.5 million during that same time.

All the while, effective treatments for the disease have come up short. Numerous clinical trials testing drugs designed to stop or slow the progression of the disease — not just ease its symptoms — have failed or have yet to prove beneficial to patients, prompting researchers to cast a wider net and explore a more diverse array of targets and technologies that could help solve the dementia dilemma.

“In the field, we’re certainly keeping all options open,” says Ronald Petersen, M.D., an Alzheimer’s expert and director of the Mayo Clinic Alzheimer’s Disease Research Center, who is not involved in focused ultrasound research. “Because treatments are not going to result in a silver bullet for Alzheimer’s disease.”

How can ultrasound help?

The research is still in the early stages, but studies so far show that low-intensity ultrasound waves targeted at specific regions of the brain can safely open the blood-brain barrier — a roadblock of sorts that prevents toxins, germs and other substances in the bloodstream from entering the brain tissue. And temporarily opening the barrier in areas of the brain associated with Alzheimer’s disease could give researchers a new way to deliver drugs and therapeutics straight to the source.

“Most of the things that are really cutting-edge and interesting, like gene therapies and cell therapies, require you to directly inject them into the brain,” says Michael Kaplitt, M.D., a neurosurgeon and vice chair for research at Weill Cornell Medicine, who has worked with Rezai on focused ultrasound research. “What if you could do this without brain surgery?”

It’s also possible that opening the blood-brain barrier could be helpful on its own, though more research is needed. Rezai, Kaplitt and a team of researchers found that clinical trial participants in the early stages of Alzheimer’s disease saw a modest reduction in beta-amyloid plaques — sticky protein clumps that impair communication between neurons and are one of the hallmarks of Alzheimer’s.

“Whether that will be enough to help the patient long term, I just don’t know yet. That’s what we’re still testing,” Kaplitt says. Scientists are also still studying whether removing amyloid plaques improves Alzheimer’s symptoms.

It’s unclear why opening the blood-brain barrier may cause a reduction in amyloid plaques, but one theory is it activates the system in the brain responsible for clearing out waste. Another idea: The ultrasound itself could be shattering the plaques “into a smaller, more soluble protein complex that can be cleared more readily,” Rezai postulates. Whatever the mechanism, the researchers have found “no meaningful cognitive or behavioral worsening” among clinical trial participants after several procedures, Rezai says. Some patients have reported positive changes — AARP profiled one of them in 2019.

How it works: Punching “little holes” in the barrier

First, it’s helpful to know that focused ultrasound isn’t new to medicine: It’s already used to treat symptoms of other neurodegenerative conditions like essential tremor and Parkinson’s disease. The experimental technique that’s being explored in clinical trials for Alzheimer’s, however, is different. (It’s also different from the more routine ultrasound procedures that let expecting parents peek at their developing babies, or that allow doctors to see the pumping action of the heart.)The high-tech helmet at the center of the Alzheimer’s research is attached to an MRI and contains more than 1,000 probes that emit low-intensity ultrasound waves at specific targeted areas of the brain. The patient’s head goes into the helmet, then microscopic bubbles get injected into their bloodstream. These bubbles, which are used in other imaging procedures, look like a relatively clear fluid, Kaplitt says, and can’t be felt by the patient.

When the tiny bubbles meet the energy from the ultrasound, they start to bounce around in that specific spot “and literally punch holes in this blood-brain barrier,” Kaplitt explains, causing it to open at the target without disturbing other areas of the brain. Within 24 hours, the barrier is closed again. And so far, no adverse events have been reported among the patients who’ve undergone this procedure since the research began a few years ago. “I think the most important thing that we’ve been showing is that this seems to be very safe and well tolerated,” Kaplitt says.

Fitting into the future of medicine

Rezai and Kaplitt aren’t the only researchers pursuing focused ultrasound for Alzheimer’s treatment. A handful of other U.S.-based institutions are studying the approach, and so are Canadian researchers. At the same time, scientists are looking at a myriad of technologies, targets and therapies that could potentially hold the answer — or at least part of one — to treating Alzheimer’s. “It’s likely going to be a combination of treatments that will ultimately be effective at staving off some of the cognitive impairment of aging,” the Mayo Clinic’s Petersen says.

It’s not clear whether ultrasound will fit into that mix, but Rezai is optimistic that it will play a role in how we treat brain diseases in the future. “It opens up a whole new set of opportunities for us as physicians and scientists to explore — not only for Alzheimer’s, but for other neurological conditions,” he says.

Source: AARP: https://www.aarp.org/health/dementia/info-2022/ultrasound-alzheimers.html.  Author, Rachel Nania writes about health care and health policy for AARP. Previously, she was a reporter and editor for WTOP Radio in Washington, D.C. A recipient of a Gracie Award and a regional Edward R. Murrow Award, she also participated in a dementia fellowship with the National Press Foundation

Many older people face special physical and mental health challenges which can cause behavior changes. Did you know approximately 15% of people over the age of 60 suffer from a mental disorder? And another 5% suffer from neurological disorders? The most common...

END_OF_DOCUMENT_TOKEN_TO_BE_REPLACED

After being off work for a period of time, I returned to find that one of my longer term hospice patients had died. I had spent a lot of hours with this patient, her spouse, children and hired caregivers over the course of her time on hospice. I reached out to the...

END_OF_DOCUMENT_TOKEN_TO_BE_REPLACED

How does Alzheimer’s and other dementias affect driving in older adults?

Drivers with Alzheimer's and other dementias are at a high risk of unsafe driving. Memory loss alone does not impair the critical cognitive processes needed for safe driving, but it could impact the ability of a driver to navigate without getting lost and may increase...