Anxiety and Depression Together

Over the past few years, clinicians and researchers alike have been moving towards a new conclusion: depression and anxiety are not two disorders that coexist; they are two faces of one disorder. 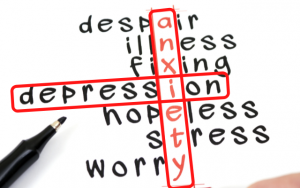 Are you anxious or are you depressed? In the world of mental health care, where exact diagnosis dictates treatment, anxiety and depression are regarded as two distinct disorders. But in the world of real people, many suffer from both conditions. In fact, most mood disorders present as a combination of anxiety and depression. Surveys show that 60-70% of those with depression also have anxiety. And half of those with chronic anxiety also have clinically significant symptoms of depression.

The coexistence of anxiety and depression, called comorbidity or co-occurring disorders in the medical community, needs serious consideration. If not recognized and treated individually or together, symptoms are more chronic, day-to-day functioning is affected, and it can raise suicide risk in older adults.

Symptoms of Anxiety and Depression

Common anxiety signs and symptoms include:

Although not all people experience the same symptoms, similar symptoms can occur in both depression and anxiety.  In comparing the two lists below, notice symptoms they have in common. Anxiety is even included as a symptom of depression, e.g. Anxiety, agitation or restlessness.

“They’re probably two sides of the same coin,” says David Barlow, Ph.D., director of the Center for Anxiety and Related Disorders at Boston University. “The genetics seem to be the same. The neurobiology seems to overlap. The psychological and biological nature of the vulnerability are the same. It just seems that some people with the vulnerability react with anxiety to life stressors. And some people, in addition, go beyond that to become depressed.”

They close down. “Depression seems to be a shutdown,” explains Barlow. “Anxiety is a kind of looking to the future, seeing dangerous things that might happen in the next hour, day or weeks. Depression is all that with the addition of ‘I really don’t think I’m going to be able to cope with this, maybe I’ll just give up.’ It’s shutdown marked by mental, cognitive or behavioral slowing.”

At the core of the double disorder is some shared mechanism gone awry. Research points to the over-reactivity of the stress response system. This sends emotional centers of the brain into overdrive, including the “fear center” in the part of the brain called the amygdala. Negative stimuli make a disproportionate impact and hijack response systems.

For many people, admitting to anxiety is more acceptable to themselves and the world than saying that they are depressed. Their denial of depression may increase their anxiety and make treating anxiety more challenging.

Mental health professionals themselves often have difficulty distinguishing anxiety from depression, and to some degree, there are correct. The treatments that work best for depression also combat anxiety.

According to physicians Edward Shorter of Canada and Peter Tyrer of England, the prevailing view of anxiety and depression as two distinct disorders, with multiple flavors of anxiety, is a “wrong classification” that has led the pharmaceutical industry down a “blind alley.” It’s bad enough that the separation of anxiety and depression lacks clinical relevance. But it’s also “one reason for the big slowdown in drug discovery in psychiatric drugs,” the two contend in a recent article published in the British Medical Journal. It’s difficult to create effective drugs for marketing-driven disease “niches.”

Medical Assessment – Of course the first step in dealing with symptoms is talking with a physician. Be specific about symptoms. Lab work and other testing can be used to rule out medical conditions. Urinary tract infections (UTIs), dementia, and other conditions can cause or can be the result of depression or anxiety or a combination of both.

Medications – The drugs most commonly used against depression, SSRIs, or selective serotonin reuptake inhibitors, have also been proved effective against an array of anxiety disorders, from social phobia to panic and post-traumatic stress disorder (PTSD). Which drug a patient should be prescribed is based more on what he or she can tolerate rather than on symptoms.

For older adults, the (SSRIs) and serotonin norepinephrine reuptake inhibitors (SNRIs) are more commonly used, due to their ability to tolerate the medications and for safety in this population.

Psychological treatment. Cognitive-behavioral therapy (CBT) targets response patterns central to both conditions. 80-90% success in getting people functioning well with CBT, “provided it’s done correctly.” Not all psychotherapy is CBT, which has a very specific set of procedures, nor is every mental health professional trained in CBT. Patients have to make sure that is what they are being treated by someone who is trained and has experience with CBT, especially experience with family caregivers or older adults.

Mindfulness practices also are being used and studied with both depression and anxiety.

The good news is that all these options mean that family caregivers and older adults have multiple options for treating depression and/or anxiety.

In practice, treatment is targeted at depression and anxiety simultaneously. “There’s increasing interest in treating both disorders at the same time,” reports Joseph Himle, Ph.D., associate director of the anxiety disorders unit at the University of Michigan. “Cognitive behavioral therapy is particularly attractive because it has applications to both.”

Studies show that it is effective against both. But sometimes the depression is so incapacitating that it has to be tackled first. Depression, for example, typically interferes with exposure therapy for anxiety, in which people confront in a graduated way situations they avoid because they give rise to overwhelming fear.

Treatment averages 12 to 15 weeks, and patients can expect to see significant improvement by six weeks. “CBT doesn’t involve years and years of talk therapy,” says Ross. “There’s homework, practice and development of lifestyle changes. Once patients learn how to identify the trigger thoughts or feelings, or events or people, they need to keep doing that. CBT gives people the tools they need.”

Who is at risk for combined anxiety and depression? There’s definitely a family component. “Looking at [what disorders populate] the family history of a person who presents with either primary anxiety or depression provides a clue to whether he or she will end up with both,” says Joseph Himle, Ph.D., associate director of the anxiety disorders unit at University of Michigan.

The nature of the anxiety disorder also has an influence. Obsessive-compulsive disorder, panic disorder and social phobia are particularly associated with depression. Specific phobias are less so.

Usually, anxiety precedes depression, typically by several years. Currently, the average age of onset of any anxiety disorder is late childhood/early adolescence. Psychologist Michael Yapko, Ph.D., contends that presents a huge opportunity for the prevention of depression, as the average age of first onset is now mid-20s. “A young person is not likely to outgrow anxiety unless treated and taught cognitive skills,” he says. “But aggressive treatment of the anxiety when it appears can prevent the subsequent development of depression.”

“The shared cornerstone of anxiety and depression is the perceptual process of overestimating the risk in a situation and underestimating personal resources for coping.” Those vulnerable see lots of risk in everyday things—applying for a job, asking for a favor, asking for a date.

Further, anxiety and depression share an avoidant coping style. Sufferers avoid what they fear instead of developing the skills to handle the kinds of situations that make them uncomfortable. Often enough a lack of social skills is at the root.

In fact, says Jerilyn Ross, LICSW, president of the Anxiety Disorders Association of America, the link between social phobia and depression is “dramatic. It often affects young people who can’t go out, can’t date, don’t have friends. They’re very isolated, all alone, and feel cut off.”

Sometimes anxiety is dispositional, and sometimes it’s transmitted to children by parental over concern. “The largest group of depression/anxiety sufferers is Baby Boomers,” says Psychologist Michael Yapko, Ph.D.  “The fastest growing group is their children. They can’t teach kids what they don’t know. Plus, their desire to raise perfect children puts tremendous pressures on the kids. They’re creating a bumper crop of anxious/depressed children.”

Treatment seldom hinges on which disorder came first. “In many cases,” says Ross, “the depression exists because the anxiety is so draining. Once you treat the anxiety, the depression lifts.”

In conclusion, the message is don’t suffer, think you are weak or overlook symptoms in yourself or the older adults you care for. Help is available.

Watch this free presentation titled, Combating Loneliness in Seniors, presented by Dr. Thomas Weiss, Geriatric Psychologist. Loneliness can be described as the discrepancy between a person's desired and actual social relationship. It's a unique situation in which a...

END_OF_DOCUMENT_TOKEN_TO_BE_REPLACED

It's not unusual for caregivers and those they care for to experience depression. But did you know there are lots of illnesses that can mimic depression?   In the past, it was common for people to deny depression, claiming that they were “fine,” or that they are just...

END_OF_DOCUMENT_TOKEN_TO_BE_REPLACED

Suicide is one of the leading causes of death in the U.S., and is an important problem among older adults who are especially vulnerable to suicide for a number of reasons. If someone you know is thinking about suicide, there are simple yet powerful steps you can take,...