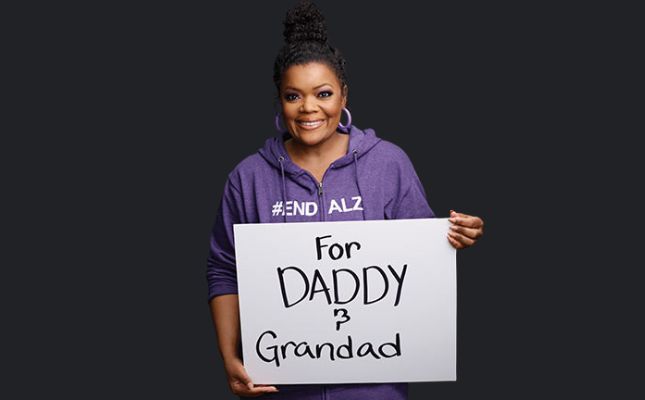 As a young girl in East Cleveland, Ohio, actress Yvette Nicole Brown dreamed of a career in show business. Her father, Omar, stoked her ambitions, taking her to movies regularly and sharing his stacks of R&B and soul records.

After nearly two decades of hard work growing her career in Hollywood, Brown landed her dream acting role in 2009 on NBC’s hit prime-time sitcom “Community.” Onscreen, Brown portrayed Shirley Bennett, the show’s sweet but often instigating “mother hen.” Off-screen, however, Brown’s role was much more serious: She became a full-time caregiver for her father as he developed Alzheimer’s.

‘A little bit of him was slipping away’ 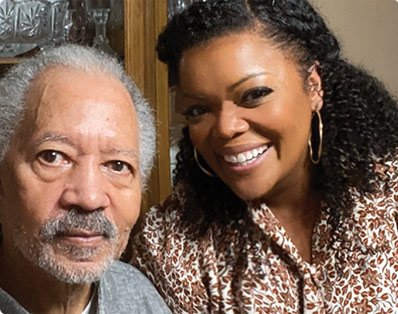 Every Sunday since Brown moved to Los Angeles, she and Omar would catch up over the phone. She tried convincing her father, who lived alone, to move from Ohio to California, but he always playfully objected. By 2011, Brown realized that having her father close was more than a nicety. It was a necessity. “Every time I would call him, it just seemed like a little bit of him was slipping away,” she says.

The signs were all too familiar to Brown — her paternal grandfather had Alzheimer’s. “For the longest time, [Alzheimer’s] was something horrible that affected Granddad. No one else in our family thought that it was coming for them. Nobody,” Brown says.

But it soon became evident that her dad would face the same fate. During a trip to Cleveland to visit family, Brown received a call from Omar, who had gotten lost while he was driving to meet her at a family member’s house. He was disoriented, “meandering on side streets,” even though he had driven to the house countless times before, Brown says. “That’s when … it hit me, because his dad had it, and I was just like ‘Oh my God.’”

Slowly, the disease progressed. Soon Brown felt there was no longer a choice — she needed to step in as her dad’s caregiver. “I hadn’t really thought it through, just that I knew I had to do it,” she says. Her father relocated to Los Angeles in 2013.

Brown quickly discovered that her 16-hour days on the “Community” set and around-the-clock caregiving didn’t go hand-in-hand. In 2014, she made the painful choice to walk away from the show after five seasons. The decision was devastating for Brown and was met with sadness by her costars and “Community” fans around the world.

“I got a lot of flak for leaving, but I don’t think people understood. This is my dad, and he was having a crisis; I’m his daughter and it’s my job to take care of him,” Brown says.

‘He still finds joy in life’

Currently in the middle stage of Alzheimer’s, Omar has difficulty remembering his name or how he got somewhere. But parts of his warm, positive personality still shine through the darkness of dementia. “Even on days when he doesn’t even know where he is, he still finds joy in life. He’s just got a sense of wonder that’s never gone away,” Brown says. “Only now, I am the keeper of his memories.”

Brown admits caregiving has taken a significant toll on her personal and professional life — but she has no regrets. “I don’t know how much longer I’m going to have him, so I want to soak up every minute, whether it’s good or bad,” she says.

Eventually Brown was able to find a balance between caregiving and her career, returning to acting with a recurring role on the popular CBS sitcom “Mom,” appearing in the film “Avengers: Endgame” and hosting the Disney+ game show “The Big Fib.”

As an Alzheimer’s Association Celebrity Champion, Brown raises awareness of the disease and the resources available through the organization. While she speaks up to honor her dad, she hopes sharing her story encourages a more kind, altruistic world.

“I tell people to support the Association, for those who are living with the disease and their family members,” Brown says. “And, hopefully, that generosity will be reciprocated and someone will help you out when you’re facing a hard time.”

Source: ALZ: A magazine of the Alzheimer’s Association

END_OF_DOCUMENT_TOKEN_TO_BE_REPLACED

Caregiving in the US depletes incomes, job opportunities, and future retirement payments as family members struggle financially in order to “do what’s right.” Nearly 50 million people, most of them working, provide an average of 24 hours a week of unpaid care to older...

END_OF_DOCUMENT_TOKEN_TO_BE_REPLACED

Creating a Daily Care Plan for those with Dementia

Learn How to Create a Daily Care Plan Daily routines can be helpful for both you the caregiver and the person living with dementia. A planned day allows you to spend less time trying to figure out what to do, and more time on activities that provide meaning and...